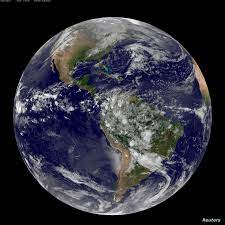 International scientists have introduced new units to measure the world’s largest and smallest objects, and under these measurements Earth has become a new standard unit, the “Rhona Gram.”

Scientists participating in the 27th meeting of the General Conference on Weights and Metrics agreed to introduce ronna, quetta, ronto and quecto units for the International System of Units (SI).

France Press says it is the first time in more than three decades that new benchmarks have been added to the International System of Units, the system of measurement units used in every majority of the world’s countries.

The scientific need led to an increase in the number of starters, the last time new units were introduced, in 1991, when chemists wanted to express large molecular quantities, adding “zeta” and “Utah”.

After a meeting at the Palace of Versailles, near the French capital, Paris, that ended last Friday, member States of the International Bureau of Weights and Metrics agreed to pass new units that would make it easier to express large and small quantities.

Richard Brown, head of metrology at the UK’s National Physical Laboratory, the body that led the introduction of the new primers, said that Rona Gram had been introduced, a single number followed by 27 zero, which is larger than the current largest standard unit, Utah, which is one with 24 zero.

The scientist said that “Utah” is no longer enough to deal with the world’s voracious appetite for data, adding: “With regard to the expression of data as” Utah “, which is now the highest prefix, we are very close to the limit.”

The “Kita” unit, one followed by 30 zero, was introduced. “Quektu” is part of the keta.

Brown says that for example, “Jupiter becomes about two keta grams”, the number 2 followed by 30 zero.