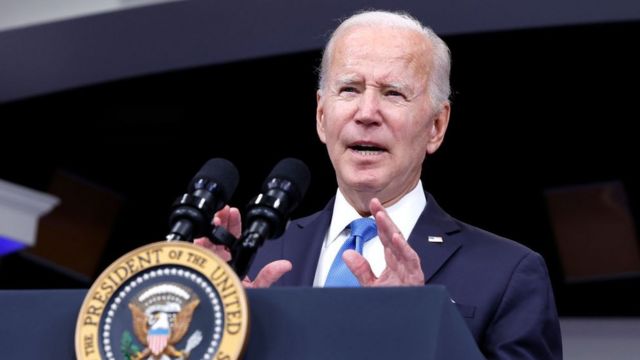 US President Joe Biden said in a speech on Monday that oil companies “should pay higher taxes on their large profits if they don’t lower gasoline prices.”

The oil industry has a choice.

Either invest in America by lowering prices for consumers at the pump and increasing production and refining capacity.

Or pay a higher tax on your excessive profits and face other restrictions.

The White House said Biden was responding “to reports in recent days of oil majors making record profits even as they refuse to help lower fuel prices for the American people.”

A person familiar, speaking on condition of anonymity, said Biden would introduce a tax on energy companies’ profits, as he sought to pressure them to cut prices.

A White House official was quoted by AFP as saying Biden had again put pressure on major oil and gas companies to “invest their record profits in reducing energy prices for American households and increasing their production.”

“If you don’t, Biden will ask Congress to consider taxing it and subjecting it to other restrictions.”

AFP said the statements came a week before the midterm elections, amid consumer dismay over inflation and high fuel prices.

To mitigate price rises caused in particular by Ukraine’s war and sanctions on Russia, one of the largest exporters of oil and gas, the administration pumped some 180 million barrels of crude oil from strategic reserves into the market, in an unprecedented move.

The average price per gallon of gasoline (3.78 liters) was $3.76, according to the American Automotive Association.

Prices remain high, although they have fallen in recent months after hitting record highs in the spring, exceeding $5 per gallon.

Oil prices fall to their lowest level in seven months