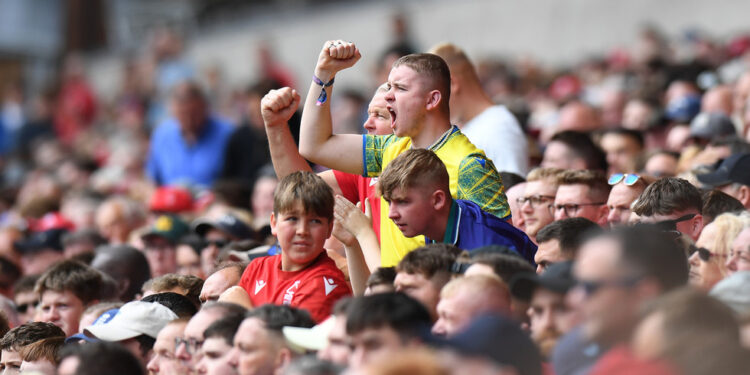 The Football Supporters’ Association (FSA) in England has requested that fans who have lost football due to the postponement of football matches following the death of Queen Elizabeth II.

On Saturday, with games being canceled from the grassroots to the Premier League, FSA chairman Malcolm Clarke urged railway companies and English football authorities to ensure fans who were due to travel to games this weekend do not lose out financially as a result of the decision to suspend the action over the weekend out of respect for the 96-year-old monarch.

“There’s a big question about refunds, pre-booked train tickets for away games and all that,” he said. said Clarke.

“We would certainly expect the rail industry and football authorities to take a very sympathetic view of this. It’s not a good time to ask fans to spend money on things that aren’t happening.” he added.

The Queen was patron of the Football Association (FA), which decided to ax matches despite other sports such as cricket, golf and rugby, but with pre-match honors.

However, according to the FSA and others like former England internationals Gary Neville and Peter Crouch, football fans and players could still have paid their respects if the games had taken place.

“We believe football is at its best when it brings people together at times of great national importance – be they moments of joy or moments of sadness.” explained the FSA on Friday:

“Our view, shared with football authorities, is that most fans would have loved to have gone to the games this weekend and paid their respects to the Queen along with their fellow fans.

“Black armbands, silence maintained, national anthem, Royal Band playing etc in front of millions of viewers around the world? Isn’t that a better farewell?” portrayed Crouch on Twitter as Neville saying: “The sport does a better job of demonstrating the respect the Queen deserves than most.”

Asked whether displays of respect at the Oval for England’s cricket Test against South Africa and the PGA Championship at Wentworth supported the FSA’s view, Clarke replied: “We feel that there could have been other ways of paying tribute that would have actually made more sense than just calling it all off, especially with things like children’s football.”

With Queen Elizabeth’s funeral scheduled for Monday September 19, it is currently unclear whether next weekend’s round of football will also be canceled or severely impacted.