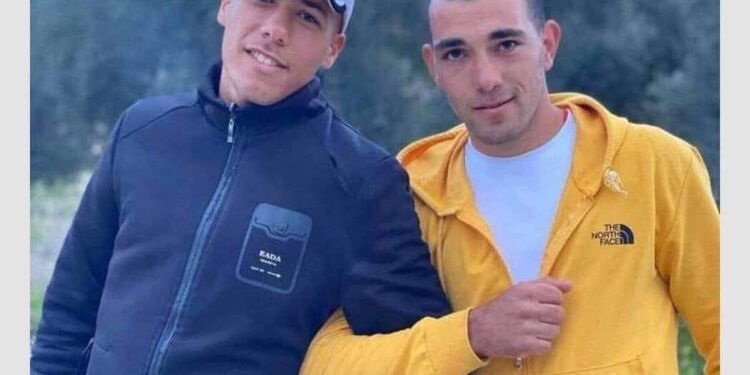 Two young men were killed on Wednesday by the Israeli occupation forces’ bullets, near the Al-Jalama military checkpoint, north of Jenin according to local sources.

Security sources confirmed that two young men from Kfardan, west of Jenin, were killed, and their bodies were seized at the Al-Jalama checkpoint, while local sources reported that the occupation forces called the parents of the two killed to identify them.

Besides, (Voice of Palestine) radio confirmed that the two young men are Ahmed Ayman and Abdel Rahman Abed, after the family got to know their bodies.

The occupation forces launched a sweeping and search campaign in the vicinity of Al-Jalama military checkpoint, and shot two young men, seriously wounding them, before their martyrdom was announced later.

In the meantime, the occupation authorities decided to “close the Al-Jalama checkpoint to the movement of vehicles until Friday morning, with the exception of the passage of workers and goods as usual.”

The Israeli army spokesman said that two gunmen were spotted in the seam area near Al-Jalama, so the army forces that rushed to the place surrounded them.

He added, “Measures were started in an attempt to arrest them, so the gunmen opened fire, and the forces responded and neutralized them.”

According to the Israeli journalist, Yoav Zeitoun from the Yedioth Ahronoth newspaper, “the army spotted suspicious figures at the seam line near the checkpoint, so a force from (Nahal) was mobilized to the site and surrounded the suspects who opened fire on the soldiers.”

He added, “In an exchange of fire, at least two militants were neutralized and were seriously wounded.”

The spokesman for the occupation army said, at dawn today, Wednesday, that a report was received of an exchange of fire near the Jalameh checkpoint, north of Jenin, indicating that “the details are under examination.”

In the context, the Israeli website (Hadshot Batakhon Sde) said that a temporary ban was imposed on the details of the event at the Al-Jalama checkpoint, at the request of the security authorities, with the exception of “neutralizing two Palestinians.”

An active movement of Israeli ambulances was seen shortly after the shooting, while flares were fired in the vicinity of Al-Jalama checkpoint, after reports of gunfire in the place.